It's been a while..
Busy with stuff going on at home and office.
Something happened today.
I sat for Part 1 CIA exam.
If you don't know what CIA is, it's stand for Certified Internal Auditor.
Aiming for Amanina Fasihah, CIA yaww~
Okay tu goal 2013, insya Allah.

Then this morning, I sat for the exam.
Seriously gelabah sangat.
My hands were all sweaty from morning until the result went out.
Mmg dalam hati super tawakkal.
I'd pray I wanna make my parents happy
Coz I thought my real goal is to make them happy by passing the exam.

I was wrong.
I should have set my intention right.
I failed the test.
Yeah I did.
It was a close result.
Passing mark is around 600. 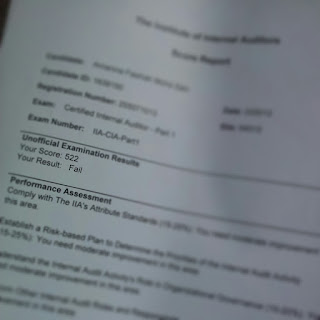 But I'm fine with it.
Who says it's easy to be successful?
Successful is not measured over the number of medals or trophies you have,
Nor the number of failures you faced,
But the value that you learned from all those bittersweet memories.

I've learned mine.
Next time I'm setting my intention right.
I wanna be a CIA because I wanna be a good muslim CIA whom can better served the religion, race and country with His blessings insya Allah.

Something I came across today,

Well that's it for today :)
Hopefully it'll benefit you too.

i wanna share with you guys the miserable life of someone who holds everything to oneself.

Allah had created everyone with feelings.
they cry, laugh, angry, sulk and much more.
with a slight feeling in the heart,
the feeling is shown directly to the body gestures up until face expressions.

I know someone who has problem managing her feelings.
She likes to bottle up every single feelings except anger.
She feels that showing anger will solve everything.

But she never realizes that that feeling hurts other people too deep.
Every wound was not healed by soothing words,
But was dabbed with more and more salt.

She was soo lost alright.
She feels that showing compassion will destroy her ego.
Showing mercy will hurt her precious ego.

What she didn't realize is that,
The people whom loved her soo much,
Were the people she hurt most.

How selfish she was.
What was the reason that she had turned into an egomaniac person?
Well, she feels that people don't her feelings matter to everyone.
Each time she spoke her true feelings,
People just pushed them away,
As if they weren't important.

At a point, she was stucked between two roads.
One, she really really really wanted to go to the route coz she thinks that she'll live happily at the end of the route.
Second, she felt she had to chose the route because people thinks its the best for her.

She really wanted to pass through the first road.
But trying hard to learn to break the ego-wall,
She chose the second route.

Becoming lost with her own emotions,
She find it easy to put blame on everyone,
And making them hurt is the best solution.
She becomes resigned (pasrah) with her choice.

People around her whom were so patience and loyal to her,
Were crushed with her harsh words and attitude.
Honestly, deep down in her heart,
Those actions were not hers.
They were based on her ego conscious.
Those actions were stupid.

She learned something today,
Finally she had awaken from her deep-ego sleep.

Someone showed her the true meaning of redha and pasrah.
If you would ask yourself,
In this life, do you normally redha or pasrah?

Do you understand both meanings and can you differentiate them?
What is redha and pasrah?

Redha is something that can be classified into two:
- Redha Allah towards His servants
Allah showers us with endless nikmat, love, compassion every second in our lives.

- Redha from Allah's Servants to His Lord
Being greatful, thankful to Allah for all His mercy and compassion towards us.

So, let us ask ourselves, where do we stand?
Within His Rahmat or really far from His side?

Back to the girl's story.
She had always felt that every decision made by her family,
She had to accept it with good faith.
But all this while, she had pasrah and never really learn the meaning of redha.
Never thought that all her actions are leading her away from Allah's blessing.

But she is lucky to have really great family members.
Allah had placed them around her so that she is guided on the right track.
It's okay to do make wrong decisions,
As long as you really believe that decision will make you a better person,
And to make you closer to Allah.

And I'm lucky that I knew that girl,
So I can learn from her mistakes,
And try to be a better muslimah,
Insya Allah.

Let us muhasabah and istikharah,
So we wont misguided from Jannah.

our hopes that speak eloquently

fell in love with their artworks~